A bunch of guys over on the GHQ forum have created imaginary nations (imagi-nations) for their micro armor armies.  They have created an army for their country and some of them have gone all the way and created fictitious histories for their country, a flag, and even placed their imagi-nation on a map.  This may be the pinnacle of geekness and nerdiness ,,, but it sounds fun.

A long time ago when I was building some middle eastern game boards I did not want to re-create any specific region but rather create a sort of generic middle eastern town and surrounding area.  I called this area Malakastan.  So, now I’ll join in the geekness and Malakastan an official imagi-nation.

This is a work in progress …. 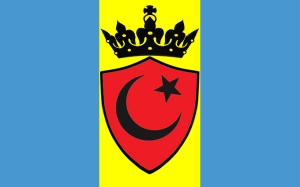 The map of Malakastan 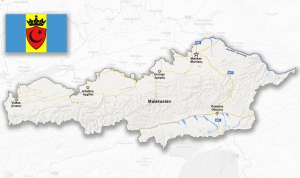 Malakastan and the surrounding area

Geography and Climate:
Location: Malakastan Shares borders with Kyrgystan, China, Tajukistan, and Uzbekistan. The capitol city of Malakas is on the 40 degree north latitude line, the same latitude as Northern Turkey, Northern Greece, Southern Italy, Central Spain, New Jersey, and Northern California.
Climate: The weather in Malakastan is generally mild year round. Lower elevations in the south of the country are more arid and temperatures in the summer can reach 90 degrees or more. Higher elevations in the north of the country can be cold in the winters and can get snow sporadically thought the winter. Many mountaintops are capped in snow for most of the winter.
Terrain: Regions around the cities of Vlakas, Arhithia, and Thanatos are arid deserts. Northern areas near the cities of Dromas and Malakas have fertile plains suitable for agriculture. The central mountain areas have vast forests and resemble Northern California.

Military:  The Malakastani Army uses a mix of Western European and American Hardware.
The main battle tank used it the German Leopard II which the Malakastanis call the Tiger or Tigri (Τίγρη).

Light tanks include the Swedish made CV90105 which they have named the Lion or Liontari (Λιοντάρι).  The Malakastani Army is the first army to put the CV90105 into service.

Their second line light tank is the German made TAM tank, originally made for the Argentinian Army, a Marder chassis with a Leopard 1A4 turret.  The Malakastani Army has named this tank The Cat or Gata (Γάτα).

Military vehicle painting is left up to individual units as to what they think is best for their area.
However the following guidelines are set.

Some units near the mountainous regions are looking into winter snow camo, but no units have tried it yet.  Perhaps soon.

For modelers wanting to model Malakastani vehicles, these are the paints you’ll need if you are using Testors Model Master Acryl paints or Vallejo Model Color:

Demographics:
Cities: The capitol of Malakastan is Malakas. Malakas is located in the northeast part of the country and served by several international roads including the M41.
Religion: None. The country is officially Atheist but does not have any prohibition on religion. Many religions are practiced in Malakastan including Islam, Christianity, Judaism, and some Eastern Philosophies. There are no churches, mosques or temples in the country, people practice their religion, if they have one, at home.
Ethnic Makeup: Greek travelers and Middle Eastern peoples from several nearby nations originally settled Malakastan. In the last century people have settled in Malakastan from many other parts of the world including Europe, the Americas and Asia. Malakastan is a true melting pot. The people of Malakastan are officially know as Malakastanis but often are simply referred to as Malakas.
Language: Malakia (Mαλακία), a hybrid of Greek and English.
Alphabet: Latin, however as the language is a hybrid of English and Greek, some will mix Latin and Greek alphabets in the same sentence. For example “You’re taking Mαλακία” or “Πάμε to the Σκατά river“